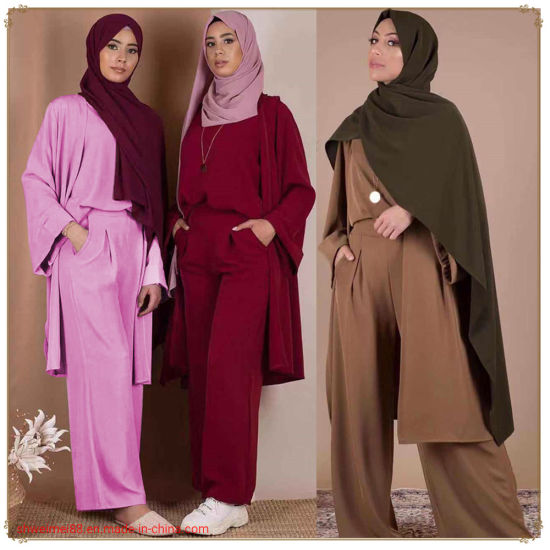 Outfits that are approved for use in different religions are of great significance for that particular faith. The Jewish clothing incorporates prayer shawl also known as the “Taleth”, the tassels attached to the shawl or coat worn by orthodox Jews known as the “Tzitzit” and the “Kippah” or skull cap worn at all times by observant Jewsish men. Similarly the Christian clothing is worn by members of the church and clergy and consists of a long robe in somber colours with the collar type distinguishing the rank of the person. However, Islamic clothes are supposed to be worn by all Muslims regardless of their social or economic status.

The different types of Islamic clothes are based on the region that they most commonly originate from, but Muslims all around the world are seen in similarly designed Islamic clothes. The most common types of clothing worn by Muslims include:

Abayas and Jilbabs: Worn by Muslim women, this form of Islamic clothes consists of a loose fitting long robe that covers the entire body from the shoulder to the ankle or toe. Most commonly made of a thick black wrinkle free fabric, it is worn over a layer of casual clothes. Most jilbabs are open in the front and allow the wearer with the ease of putting it on and buttoning it up. They often resemble the western overcoat worn in the harsh winter time to protect against the cold weather, but is made of different fabrics. Certain abayas have a small rope attached to the end of the sleeve, which is swirled around the middle finger to keep the sleeves from rolling up when the arms are raised.

Hijabs: This is by far the most popular Islamic clothes article available worldwide. It is worn by all Muslim women with a number of types of outfits. It consists of a scarf or headwear that covers the hair and wraps around the face. The Hijab can be worn with western outfits, eastern outfits or any other form of Islamic clothes, as it is mandatory for women to cover their heads in Islam.

Jubbas: The classical robe worn by Muslim men, the jubbas originated in the Arabic region. Initially worn in the desserts to protect the body from the intense heat, it has become an integral part of the religion. Today it is worn my men all around the world in particular for special Islamic events and occasions.

Kuffiyah: The headdress for Muslim men, it consists of a scarf draped over the head and shoulders. It is occasionally tied around the circumference of the head with a thick rope like cord to keep it secure in place.

These are the most frequently seen kinds of Islamic clothes worn by Muslims all around the world. Certain changes can be seen based on the region that they are worn in. These changes include styles and fabric choice based on the weather and other external factors.